I’m going to tell you something you might not want to hear.

The US economy is going GREAT. You knew that already, and it’s not the part you won’t want to hear. The number of job openings exceeded 7 million for the first time ever in July 2018 and has topped that figure each month since then. (Still not the bad news). 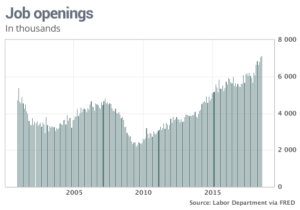 The potentially bad news is, the number of job openings now exceeds the entire segment of the workforce looking for a job, by around 900,000! The Manufacturing Institute estimates nearly half a million of the job vacancies are in the manufacturing space, and that total is projected to grow.

NAM’s Manufacturers’ Outlook Survey showed 73% of respondents say the potential workforce crisis is their number one concern. Factor in as well that younger people are more likely to be drawn to more trendy industries, and the situation gets worse. Things companies are looking at longer term include automation, training programs, and diversity programs to attract new groups.

But in the short term, if the economy stays strong, there will be winners and losers since there just aren’t enough people with the right skills, experience, and education available. Companies might have to stop just saying ‘Our employees are our number one asset’ and instead really mean it.

Looking for a New Opportunity?